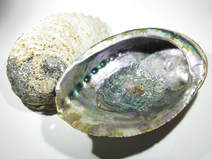 Paua is the Maori name given to three species of large sea snails that frequent the coastal waters of New Zealand, known in Australia and the United States as sea opal or abalone, and in the United Kingdom as Ormer shells.
To Maori, Paua are recognised taonga, or treasure, esteemed as a valued resource for traditional arts and crafts. Paua are frequently used to represent the eyes in Maori carvings and traditionally are associated with the stars of whetu, the symbolic eyes of the ancestors that gaze down from the night sky.
Once highly polished they have a very beautiful and striking blue,green, and purple iridescence. 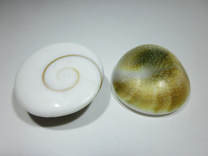 The most popular name for this stone is Shiva eye, it is also known as Buddha eye and Cat's eye to name only a few. It is found on beaches all over the world. It is the protective doorway of the Turban sea snail. This doorway, or operculum, naturally detaches from the shell and sinks to the ocean floor.
It is a crystallized form of the mineral " Aragonite ". This crystal helps to cool and calm the emotions. It helps to raise ones energy levels and enhances patience and acceptance. It gives us protection and is a bestower of good luck. Shiva eye shells represent the third eye of the Hindu god Lord Shiva. The third eye is the place of knowledge and wisdom. Natural spirals are strong and powerful symbols and represent creation, growth and evolution. 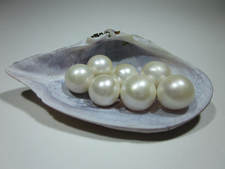 A pearl is formed when a miniscule irritating particle enters the lining of a mollusk or oyster shell.The Mollusk then grows the pearl over the intruder as a defence mechanism. Minute crystalline layers of calcium carbonate slowly collect and gather over the particle and produce a pearl. A wild freshwater is very rare and valuable. The majority of the world's commercial pearl is farmed. Cultured pearl are created by introducing an irritant into the shell lining.
Pearl has been highly esteemed as a symbol of faith, innocence, purity and charity. It enhances our personal integrity and is a stone of sincerity and devotion. It helps us to see ourselves as others see us and to be calm and graceful.
It is associated with the birth signs Gemini and Cancer.